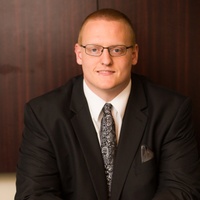 I was born and raised in Central PA. I’ve lived in the Camp Hill area almost my entire life. Since I was young, I’ve always been obsessed with stocks and learning how their markets function. When I first found out about the idea that you can make money with money, I was hooked. I started to take Economics classes in high school. Every day after school, I use to come home and look at stocks online and watch the news on the market. I would always try to pick a stock or two that I thought would go up and then check back in on it the next day. This is what eventually lead to my choice to major in Economics and is how I knew that I wanted to work in the financial sector.

I have a passion for football, and from the time I was five up until the end of my senior season of college I have played every year season. Football has taught me so many things about life and created many comparisons for me between the sport and the financial industry.

Most importantly, football has taught me that it's not about how great an individual is, but rather how good are the people that surround them. Competition brings out the best in us and pushes us to find new limits and constantly better ourselves. Competition also teaches you how to fail and allows you to learn from your faults to become even stronger.

This industry is very similar to the game of football. It takes a great team of people to be successful in the financial industry. Each person must become highly skilled in their role and trust that those around them will do the same. Together, you make a powerhouse.

Evan Shiley is a graduate from Lebanon Valley College with a Bachelor’s degree in Economics. While in college, Evan played four years of football where he earned MAC Academic Honor Roll. Evan started his Financial Career as an intern with KCA Wealth Management in June 2018 and continued his internship while attending Lebanon Valley. Upon Graduation, in May 2019 KCA presented an offer to Evan based on his work ethic and his fit for the current position available at the time as the newest addition to the team. Evan has started his full-time career as of May 2019 as a Wealth Planning Paraplanner.

Evan currently resides in Camp Hill and outside of the office Evan enjoys spending time with his family and friends. He loves attending sporting events such as baseball and football games. He also enjoys going golfing.